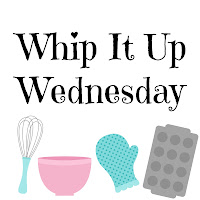 This week for Whip It Up Wednesday I am going to feature one of my favorite things my boyfriend makes!  I love chicken wings and these are wonderful!  He boils them and then broils them to make them crispy and they aren’t deep fried but still wonderful!  I will say he made me make them this time since I was going to blog about it so I can now say I’ve made them myself and they were still wonderful! 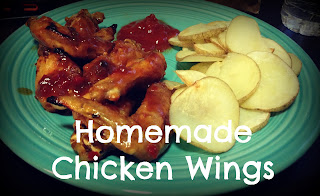 The first thing you do is get some chicken wings.  You can buy them at any grocery store. 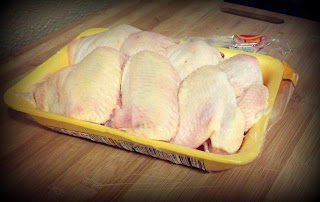 You then want to cut the wings in half at the joint of the bone.  You can also remove the tip of the wing if you want.  We didn’t do it with these wings. 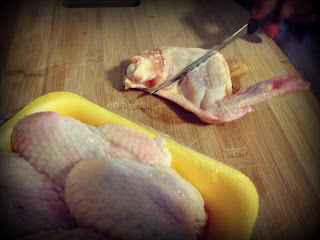 You then boil them in a pot until they are cooked all the way through, but you don’t want to overcook them.  This time we were working on a project outside while cooking so we brought them to a boil on high and let them boil for a little bit and then turned the heat down and let them lightly boil for a longer time. Maybe 30 minutes or so. 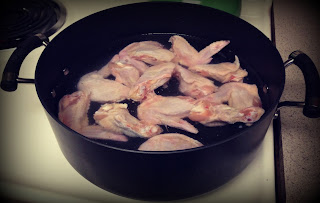 They should look about like this when they are done. 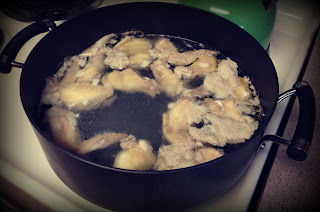 You then want to strain them.  You want to make sure that they are not saturated with water.  If you are in a rush you can lightly dry them with a towel to speed things up. 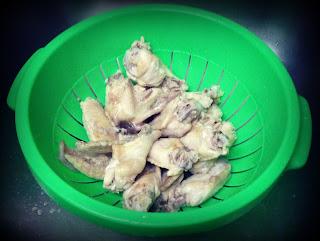 You then want to spray the pan with Pam or whatever you have and put all of the wings on the pan.  They don’t have to be spaced at a certain distance just put them so they will all fit on the pan. I will warn you that this can mess up your pan with all the grease.  I have a cheap pan that I use specifically for this. 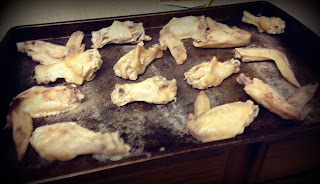 Bake or Broil until they are very crispy.  Either will work.  In this case we broiled them. 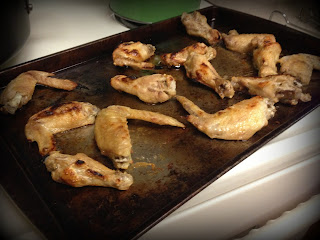 After they have cooled a little bit you want to put them in a big bowl and saturate them with your choice of sauce.  In our case we had some of the best bbq sauce in the world made a very good friend of ours!  It doesn’t get better than bbq wings to me! 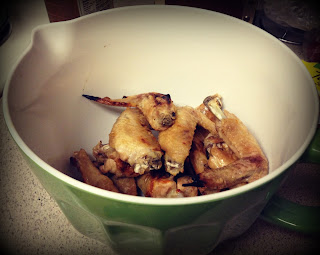 Then you put them on a plate and eat up!  We made some baked potatoe fries with ours.  All you do is cut potatoes up and bake them.  We don’t even put salt on them and I love them!  This is a great meal for any night or a game day since football season just started! 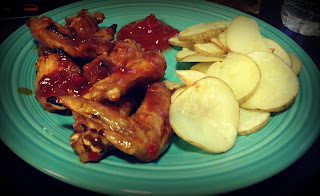 Email/Bloglovin/Facebook/Twitter/Pinterest/Instagram/Flickr
Linked up with:
Whip It Up, Work It Wednesday, Wow Me Wednesday, Time for a Party, Whatever Goes, Wow Us Wednesday, Moonlight and Mason Jars, Fantastic Thursday, Catch a Glimpse, Live Laugh Linky, A Creative Princess, The project stash, Blog Stalker, DIY Weekend