↓
Home Menu ↓
Skip to primary content
Skip to secondary content
1 Flares Twitter 0 Facebook 0 StumbleUpon 1 Google+ 0 Pin It Share 0 Reddit 0 Email -- Filament.io 1 Flares ×
Today I want to talk about a project I worked on a while ago. I found an old metal medical stand at a restore for $25.  I had been looking for something I could use in my little bitty apartment kitchen as an island.  But it had to be something that could be pushed out of the way.  So  when I saw this stand I thought it would be perfect! 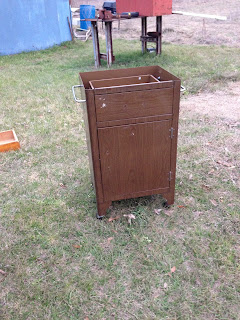 In this picture I had taken off the top and some of the handles.  I let it set not painted in my kitchen for a long time!  So first I was just going to paint it with regular paint, but I soon found out that it would just chip away easily if I did that, and I had to completely strip off the paint again and start over. 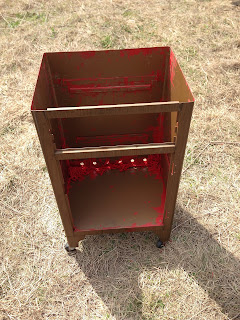 Here it was after I had stripped off most of the paint.  After talking to my boyfriends dad I went to the hardware store and got some spray paint that is made for metal.  I sanded everything down again to make it rough so the spray paint would stick well and started spray painting.  I did the outside and the inside two different colors so it took a lot of taping off and lots of coats. 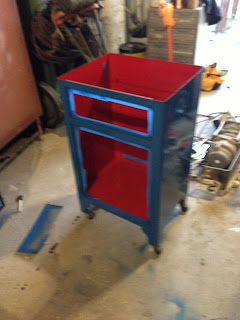 Here it is when it was almost done.  After it had dried completely the final product looked like this! 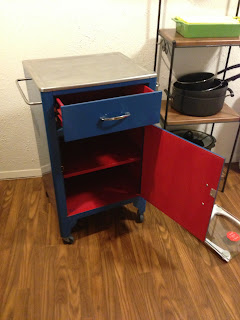 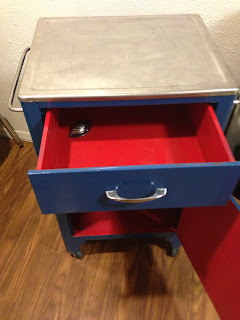 My boyfriend had gotten me a large cutting board that would fit on top so when I put it all together this is my new island! 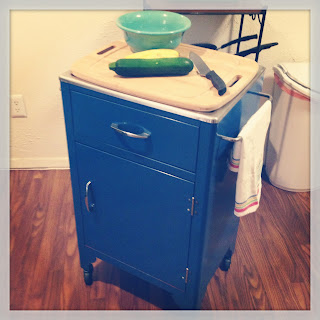 It really has helped with extra space to cook and I love the way it looks!  It was definitely a great buy!
Link Parties:
Furniture Feature Friday, Friday Redoux, Inspire Me Please, Friday Five Feature, Funky Junk